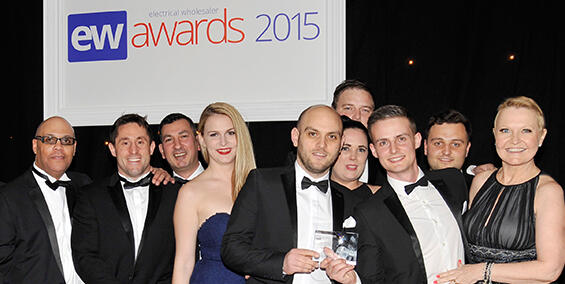 The EW Awards celebrated their second annual awards night in style at the Millennium Gloucester Hotel in the heart of London, on Thursday 14th May 2015. The event, organised by the Electrical Wholesaler Magazine, hosted a glamourous turnout of the industries finest.

Ahead of this yearâs Awards, companies from up and down the country submitted their entries in the hope to have a chance of winning, with up to 13 awards up for grabs. Moss Electrical was selected by a panel of independent judges for the innovation and impact of their customer service in relation to engagement, growth and product knowledge. Â

After careful deliberation, the judges whittled the contestants down to just a few worthy candidates: Moss Electrical was presented with the Best Electrical Wholesaler: 10 and Under Branches in recognition of its achievements and dedication to customer service. Our very own Jamie Ross was acknowledged for his contribution to the industry with the Branch Manager of the Year Award.