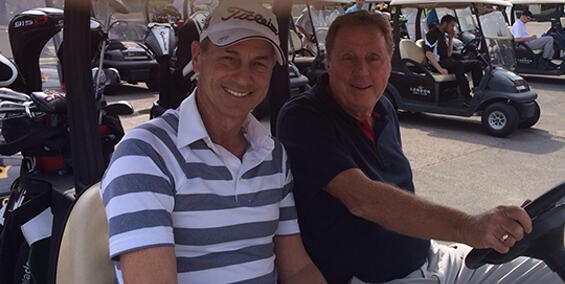 Tee Off for Charity

Moss Electrical was joined by a host of the UKâs most prestigious electrical contractors and manufacturers in a fundraising Golf Day for the groupâs chosen charity, Cancer Research UK.

A team from Moss Electrical, led by Managing Director Robert Moss hosted the first annual Moss Charity Golf Day, at the London Golf Club in Kent, which raised in excess of Â£15,000 for Cancer Research.

Following a day of golf, guests were treated to an evening of delicious food and wine with the day concluding with an awards presentations and a live charity auction hosted by a special guest, former Premier League manager Harry Redknapp. Runners-up on the day were presented with an array of custom fit golf clubs with the overall winner taking home an impressive 3 night holiday to Dubai inclusive of 2 rounds of golf.

Robert Moss said: âEvery year we bring our customers and suppliers together at an informal event as part of our initiative to develop stronger relationships, and this year we felt it could be a great opportunity to raise money for our appointed charity, Cancer Research UK. â

âWe all had a fantastic day and it was great to be part of something that raised so much money for such a worthy cause. Moss Electrical has recently felt the personal impact of Breast Cancer on two occasions over the past year therefore felt it prudent to support them where possible.â

Stefan Kemp, Commercial Marketing Manager, said: âWe were absolutely blown away by the generosity of everyone involved. On behalf of everyone here at Moss, and Cancer Research UK, we would like to say thank you to those who took part in making it such a successful event.â

Cancer Research UK is the worldâs leading charity dedicated to beating cancer through research. They save millions of lives by discovering new ways to prevent, diagnose and treat cancer, and survival has doubled over the past 40 years.

Every day in the UK there are more than 400 people diagnosed with cancer that will survive the disease for more than 10 years thanks to research.