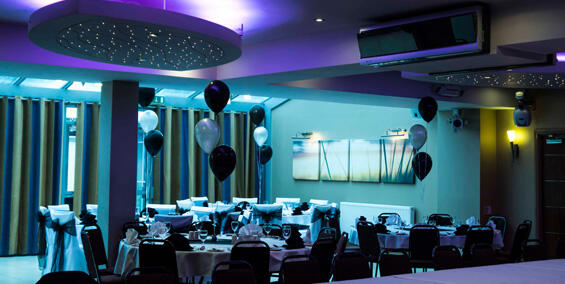 The Hi-Tide in Porthcawl, Wales, had previously used halogen lights to create sparkle and atmosphere at their prestigious lounge and cabaret function rooms.

When rising energy bills and the cost of replacements became too high, Kosnic took the opportunity to install a cost effective yet stunning LED lighting backdrop to the Porthcawl venue.

Sitting adjacent to the picturesque Welsh coastline, the Hi-Tide delivers a unique lounge, cabaret, function and entertainment experience to the borough of Porthcawl, South Wales. Available for an array of corporate events, weddings and parties, the showpiece Bayside room can cater for up to 120 people providing bar, dining, dance floor and ballroom facilities.

Hi-Tide is open for business throughout the year, with regular bookings for their function rooms interspersed with seasonal holiday tourism to the area. Such constant all year round activity means that energy use is high, so while the lighting scheme must be capable of creating the right atmosphere and ambience, it must also minimise running costs such as replacements, stock, maintenance and energy bills.

Hi-Tide Director Fran Dower had begun to grow frustrated with the regular failure of the halogen lighting. âOur staff were constantly up the ladder having to change halogen bulbs. Failures in the lead up to, and sometimes during a function was becoming a massive inconvenienceâ

The owners at Hi-Tide were aware of LED technology and looked to Electrical Wholesale and project specialists Moss Electrical to provide a solution. Specialists at Mossâs Bridgend office worked in partnership with Kosnicâs dedicated project team to carry out an energy audit and highlight potential cost savings between the existing halogen GU10âs, Candle lights and the Kosnic LED equivalents. Hi-Tide saw the huge potential cost saving by switching to LED and, with Kosnic able to retrofit all LED replacements, moved quickly to make the switch in the Bayside room.

Kosnicâs 5.5w LED dimmable candle lamps were chosen to replace the legacy 40w halogen version and were supplied with a mixture of screw caps. The candle lamps were installed in the hanging lights above the bar counter and in the ceiling chandeliers adjoining the bar.

The bar area, often the focal point of any function room, was fitted with Kosnicâs colour changing LED strip lights and infrared RGB remote control. Behind the bar, the optics had been arranged in a smart wood effect showcase. Each showcase was edge lined with LED strips to create a vibrant lighting effect, with bar staff able to change the colour, speed and fade timing to create a bespoke lighting scheme to suite the mood and the occasion. LED strip lighting was installed under the bar counter to complement to overall effect.

The Kosnic LEDs have been in use since April 2013 and staff at the Hi-Tide have been impressed. âWeâve not had to change a bulb since the LEDs were installedâ says Fran Dower. âThe main reason we looked to change was the fact that our energy costs were high and the cost of replacement bulbs was getting out of hand, as we were having to purchase and store a wide model range of lights and fixtures. The LEDs that Moss and Kosnic proposed has allowed us to streamline what we have to stock.â

In addition to the Bayside room, strip LEDs have already been deployed in the Harbour Lights Bar. âThe switch to LED has really added to the overall ambience of Bayside, naturally we want our clients experience to be of the highest calibreâ