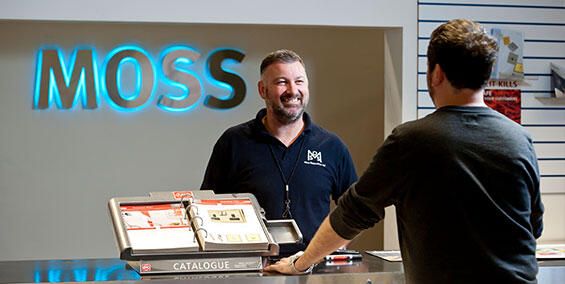 Moss Electricalâs success mirrors that of a trade where hard work, determination and the eye for an opportunity singles out the progressive from the also-rans. Here we learn how Moss builds partnerships built on levels of service few can match

Sheer hard work, coupled with business nous and inspired hunches, has brought Moss Electrical success in what is a challenging electrical wholesaler sector.

Chairman Robert Moss descends from a family of business siblings, leaving school at 18 to work for his father, shunning science at university to learn the ropes of wholesaling from the bottom up.

âI was pretty much self-taught and wanted to learn,â he recounts. âMy first job was sorting the items my father had bought at auction, then going out with the drivers, working on the trade counter, in accounts, and on sales and purchase ledger.â

After selling that business to Bennett & Fountain in 1986, Robert, now managing director, grew the wholesaler to 55 branches before leaving to join cable company GET, travelling to China to expand their product portfolio. Then destiny called in 1991 when he set up Moss Electrical at home. Delivering from home with an Â£850,000 first year turnover, Robert saw fortune transform as business ballooned to Â£19m annually by 2007.

By then, Robert had gathered around him the key personnel who today continue to develop the wholesalerâs offering as the challenge of technology, pricing and the grey market bite into the margins enjoyed in âthe good old daysâ.

Transformation of East London in the build-up to the London Olympics 2012 sparked a move to their current site in Dartford. Project managing the fitout, including IT, was Chris Homer, with Moss Electrical for 24 years â a Newey & Eyre man wooed by Robert â who with operations director Lindsay Goubel is the backbone of the business, not forgetting warehouse manager Lee OâConnor, himself a veteran of 25 yearsâ service.

Â Ever one for the calculated gamble, Robertâs unshakeable commitment and focus on something he believes in figures strongly in the elements of achievement for Moss. âIf I go at something 100mph it generally works but Iâve also invested in the right people and they are the reason for our success.â

Independent wholesalers may be âfar quicker on their feet and carry deeper product knowledgeâ but they are under fire from several directions. Greater automation, more lighting controls and the rise of modular/prefabricated systems all spell a drift of business away from electrical wholesalers and contractors, Robert believes.Â Â

Controlled pricing also weakens margins, despite the bigger volumes Moss is handling and that means smarter procurement to bridge the divide. Seldom slow to spot an opportunity, the business is eyeing solar, expecting 50,000 installs for housing associations in the next year alone. âWeâre looking closely at energy storage too,â says Robert. âItâs got to come and we are almost ready to move into it. Electric vehicle charging points are going to come as the EV market expands.â

Â If strength lies in numbers, buying groups may well aid independents in buffering them against the power of the big national wholesalers. Robert bought into them early on, joining FEGIME in 1992, the year Moss Electrical began. But before that: âMy father and I were founder members of AWEBB, later joining Associated Electrical Distributors, which is now FEGIME. He adds: âThe independent market is shrinking in volume terms because of all acquisitions but it remains strong and is still a good percentage of the whole.

âAs long as Fegime work together to maintain or increase our market share and we are not hurting each other too much we are doing what is necessary to grow.â

That said, Moss Electrical can point to other factors that future-proof it to some degree.

âWe started and grew within ourselves when profitability was good. Insuring our debts has helped us to sustain growth and it helps that we are a cash rich business. Unfortunately, government, both local and national are âstealingâ our cash!â

From the early days, the sales profile has altered dramatically. âItâs 5% counter and 95% delivery now,â declares Robert. âCounter business has virtually disappeared because all we do now is maintain projects, which we are good at because we have the loading facilities, vehicles, the space and the right processes.â

Â When Moss Electrical set out âeverything came through an electrical wholesaler. If electricity passed through, we would supply. There was no competition from the Internet, sheds and specialists then.â

But the staggering pace of technology change can leave you for dead if you donât keep up, he stresses. âWe cannot remain old-school electrical wholesalers. We need to be fleet-footed, tough negotiators and continue to bang on doors and maintain the customer loyalty that we have created. Most important of all, our profitability needs protecting and to achieve that would mean deterring manufacturers deviating from the wholesale supply chain.â

The very raison dâetre of the electrical wholesaling principle is at stake as online purchasing powers forward. âAnyone who goes online is not a wholesaler, they are going to the end-user and itâs wrong,â Robert states. âWhy put product online cheaper than we sell in-store. If I took this route, it would be selective, not selling our other services.â

An electrical engineer at heart, Chris Homer, had become an Edmundsons branch manager by 23 before Robert plucked him for the position of regional director within the Bennett group overseeing 17 branches by his mid-20s. Now at Moss Electrical, he took a degree in IT in his late 30s âto enhance my role within the company and because we were fed up with the outsourcing costs, preferring cutting edge technology to improve our business in terms of reporting.â

In his time, Moss Electrical has emerged from âa traditional-style business that we were conscious of being when we started. My philosophy is to align our business interests to customer needs.

His other mantra is legacy. Chris is there to support Lindsay Goubel, who has the most difficult task as Operations Director âhowever and whenever she needs meâ while board member Stefan Kemp, who has risen through the Moss ranks, is in the frame for a continuing key role in sales and marketing. âItâs all about finding someone I can pass responsibility to,â he explains.

âWeâve been guilty of producing plenty of David Beckhams who never want to pass the ball because we all want to score ourselves. Someone has to step out of the mould, empower others, manage them, support them, let them make mistakes and try not to kill them over it and move forward.â

Moss Electrical reaches another milestone this September when Chris Homerâs mission is to move everything âlock, stock and barrelâ into a Microsoft Data Centre by 2020. âItâs a time-consuming project. People will have wireless access so every piece of software we run will be cloud-driven. Weâve part completed it with MS365 and are about to go Azure,â he explains.

Why do it? âHome-working becomes more optimal and we donât need UPSs or generators and you gain a flatline in your P&L because you have a fixed monthly cost and no depreciation issues to consider.â

Joining a graduate scheme for Newey & Eyre at 18, she almost gave up the ghost but her father insisted she persisted. âI got on with it not to let him down and caught the bug.

âThe training scheme was one of legend â we learnt everything. My niche happened to be customer service, perhaps because my default setting is to please.â

She landed at Bennett & Fountain, working with Robert and Chris, who poached her branch manager with Lindsay in tow. âWorking there was an eye-opening experience. I ended up running the sales team. In this industry, as long as you turn up every day and youâre on time, you tend to get promoted,â she notes modestly.

âI was given an opportunity that wasnât glamorous but itâs an honest industry and I believe and trust in it - you can find your space and be someone.â

After 20 years at Moss Electrical and still just 46, Lindsay feels she needs to give back to the industry, bringing her own people through.

âIâm seeking the right ingredients rather than qualifications: caring and passionate with va va voom, who can feel the personality of Moss.â Recruiting by word of mouth though is long-haul, Lindsay admits, but she prefers this route to âpoachingâ talent from the industry. However, the sector missed a trick in the boom times by failing to train, she believes, shipping in âpeople who could do stuffâ and thinking about âthe now not the futureâ, while making sales not profit-based decisions. âBefore you knew it, what we have now became the norm.â

That mindset is destroying wholesaler margins too, she says, increasing customer expectations of what they can get. âThey think you are unreasonable if you make a miniscule margin. We need to be braver and more transparent with our peers and talk more among ourselves.â There are rising costs too. âFuel, driver CPC training, toll charges, congestion charging, WEEE directive, manual handling and FORS, business rates...the list is endless. Actually, we need more margin to operate efficiently!â

Keeping the customer satisfied is growing harder. âService is more demanding because expectations are so much higher. The Internet has changed everything, making products quicker to access and product types change so quickly too. Lindsay carries a clear vision of the Moss future. âThe industry needs to look itself in the eye and ask why it gets pressured on margin and make wiser decisions when it comes to logistics and project management. âI am restructuring the business to make it slicker â to give our staff a quality of life by working smarter and cleverer.â